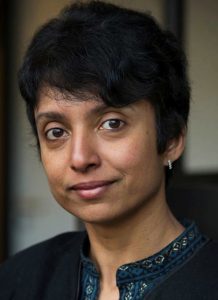 Nira Wickramasinghe is Chair and Professor of Modern South Asian studies at Leiden University in the Netherlands. Before taking up her post in the Netherlands in 2010, she worked in the Department of History at the University of Colombo, Sri Lanka. Her research centers on issues of belonging, everyday life under colonialism and the relationship between state and society in Sri Lanka and the Indian Ocean. Trained as a historian she has written on late colonial and modern Sri Lanka using a variety of archives.  Her books include: Slave in a Palanquin: Colonial Servitude and Resistance in Sri Lanka (Columbia University Press 2020); Sri Lanka in the Modern Age. A History (Oxford University Press 2015); Metallic Modern. Everyday machines in Colonial Sri Lanka (Berghahn 2014), L’Invention du Vêtement National au Sri Lanka (Karthala 2006), Dressing the Colonised Body (Orient Longman 2003), Civil Society in Sri Lanka (Sage Publ. 2001). She has been, inter alia,  a Fellow at the Shelby Cullom Davis Center for Historical Studies at Princeton University (2008-2009), British Academy Visiting Professor (2005) at the University of Oxford and  Fulbright Senior Scholar at ICAS, New York University (2003-2004). Her current research on enslaved people detaches Lanka from the subcontinent to insert the island in the Indian Ocean world. Nira Wickramasinghe studied at the Université de Paris-IV Sorbonne and received her D.Phil in modern history from the University of Oxford. She is presently involved in setting up a small academic press in Sri Lanka called Tambapanni Academic Publishers.